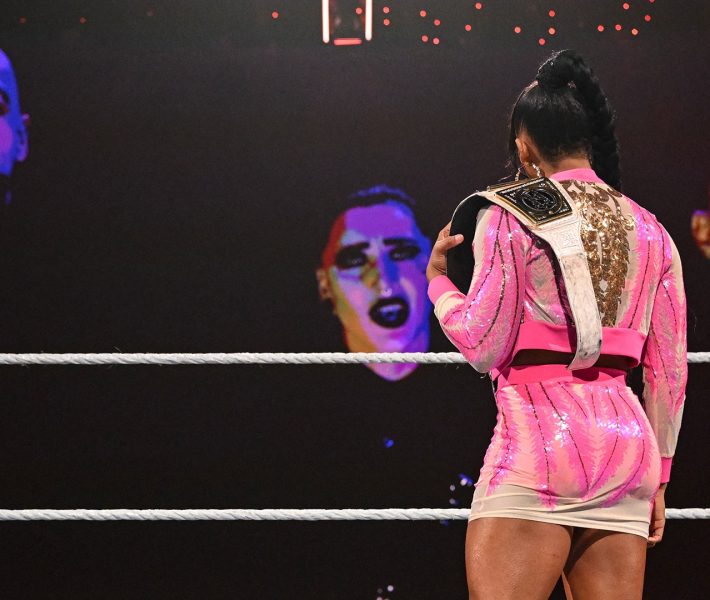 Earlier in the night, RAW aired a promo clip of what had taken place the previous Monday night when Rhea Ripley and Damian Priest had turned on Edge and formed an alliance with Finn Balor instead. Thus creating a new Judgment Day.

The segment for tonight opens with Bianca Belair coming to the ring first. Moments before, Rhea Ripley had been brought up by the commentators, reminding everyone that The Nightmare is the current number one contender to the RAW Women’s Championship at Money in The Bank. Kevin Patrick begins by interviewing Bianca Belair and asking her how prepared she is to face this new version of Rhea Ripley. Bianca begins her response by saying that she is prepared for anything and stays ready so she doesn’t have to get ready. Despite that, she says that she is looking forward to facing Rhea at Money in The Bank; as they are both at the forefront of a new generation of women in the WWE.

Bianca adds that as she was claiming so many different accolades in the company, Rhea was on the other side doing just as amazing. Bianca tells Kevin that she and Rhea used to push each other to get better and that there was mutual respect and she loved that – but ever since Rhea joined The Judgment Day, she no longer recognizes Rhea. She then says that this new version of Rhea is soulless. Bianca says that she is sure that Rhea joined the faction to intimidate people and goes on to say that she is not the one to try and intimidate. Bianca says that Rhea is free to try and intimidate anyone else in the back but when it comes to her, it’s not happening. After claiming that at the end of their match at Money in The Bank, she was still going to walk out as RAW Women’s Champion.

Rhea appears on the titantron, calling out to Bianca to capture her attention. Rhea tells Bianca that she is all talk, but The Judgment Day? They speak through their actions. As she says this, the camera pans out and the rest of The Judgment Day is shown now standing beside Rhea. Finn Balor informs Bianca that they do what they want when they want. He says they are tired of playing nice and tired of taking orders; that is why they knocked Edge off of his pedestal and removed him from The Judgment Day. Damian Priest then speaks up, saying that Edge had the right idea when he initially started the faction, it was meant as a movement for those who were tired of living their lives for others, and says that Edge contradicted himself. Edge had painted himself as their leader and said “don’t do as you’re told”. Damian says that Edge sealed his fate and now The Judgment Day is all equal.

Rhea speaks up again and says that Bianca cares too much about what everyone thinks. He says that maybe if Bianca stopped caring so much about what the WWE Universe thinks, she would actually stand a chance at retaining her RAW Women’s Championship at Money in The Bank. Rhea tells Bianca that she claims she’s the EST but it really sounds like she is trying to convince herself as such. Rhea goes on to say that she doesn’t have to tell people she’s intimidating, she just is. Rhea recalls the previous week in the fatal-four-way, she claims she had her teeth knocked loose but loved it and that in that match, she took what she wanted and is now the number one contender for the RAW Women’s Championship. Rhea says that the only EST Bianca will be at Money in The Bank will be her own greatEST downfall. Rhea then says she will walk the walk and be a two-time RAW Women’s Champion.