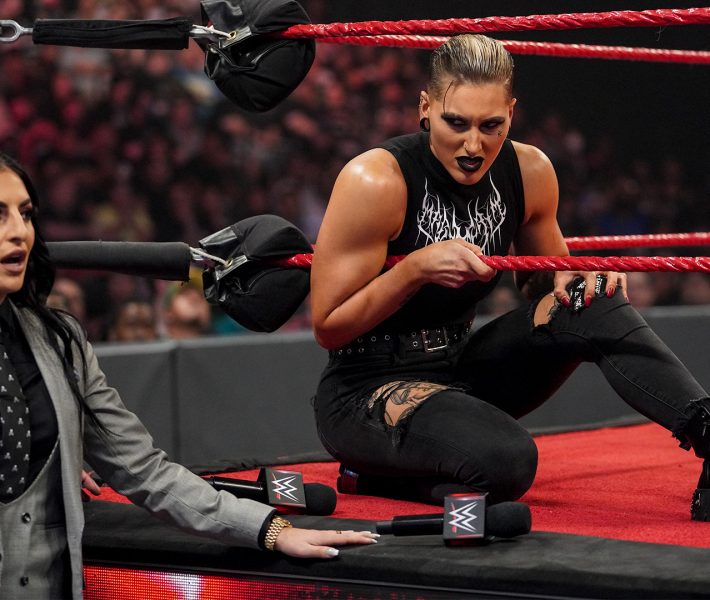 She gets on the mic and talks about how proud she is to be your new Raw Women’s Champion. Rhea Ripley can do as many of her moves as she likes, but she’ll never live up to the original. She adds up all of her title reigns and proclaims herself the only 11-time women’s champion in the history of WWE. She goes on about beating Rhea—

Flair points out she left victorious with the title while Ripley was writhing in agony with her hurt knee like a little girl.

Deville congratulates Charlotte on being an 11-time champion and Pearce points out she just said she could beat Rhea any night of the week, and if Ripley is up for the challenge, then she should be too, so the match is official! Flair kicks Ripley’s leg out of her leg and storms off!

Ripley ducks a lariat, big lifting facebuster into grounded punches, Flair gets away and kicks her in the midsection for some breathing room! Whip to the corner, charging in, sidestepped, Stinger Splash from Rhea sets up shoulder thrusts! Slugging it out in a wristlock, punches give way to a big knee from the champ, whip to the corner, Rhea explodes out with a dropkick for two!

Cravate applied, Charlotte slips out and smashes her face into the turnbuckles before hammering her with a hard chop! Smashing her into the turnbuckles, suplex reversed into an inside cradle, Front chancery, suplex lift, Flair floats over, Rhea ducks a lariat and hits a German suplex! Off the ropes, basement dropkick, cover for two!

Hard whip, clothesline to the floor, Ripley back up on the apron but Charlotte targets the injured leg to kick her back to the floor! Sliding out after her, chop blocking Rhea as Rhea writhes in agony clutching her knee, Flair throws her back inside, but referee Chad Patton backs her off so he can check on her leg as we go to break.

Back from commercial, Flair is working Ripley’s leg in the corner, wrenching it over the ropes and dropping a knee across it! Putting boots to the knee, spinning toehold, kicked into the corner and Charlotte is staggered on the turnbuckles! Short German suplex, Rhea slow to capitalize from her injured leg! Flair hammering her with forearms, Ripley catches her with a series of short-arm lariats ending with the ripcord kick!

Bridging northern lights suplex an STO backbreaker out of the corner, Charlotte follows it with a big boot! Moving her into position, Flair goes up top, hits the moonsault but Ripley’s knees were up, Ripley slaps some life back into her knee, spinning toehold into the figure four leglock! Flair rolls over and reverses the pressure!

Putting boots to Rhea after the break, chops back her into the corner, Ripley kicks her away, kick to the midsection, pumphandle… Riptide but she’s too close to the ropes and Flair gets a boot on them Charlotte grabs her title and decides she’s just walking, Ripley gives chase, Flair blasts her with the belt Rhea attacks Flair and they brawl around ringside! Riptide, Ripley throws Charlotte in the ring, Nikki ASH is here!