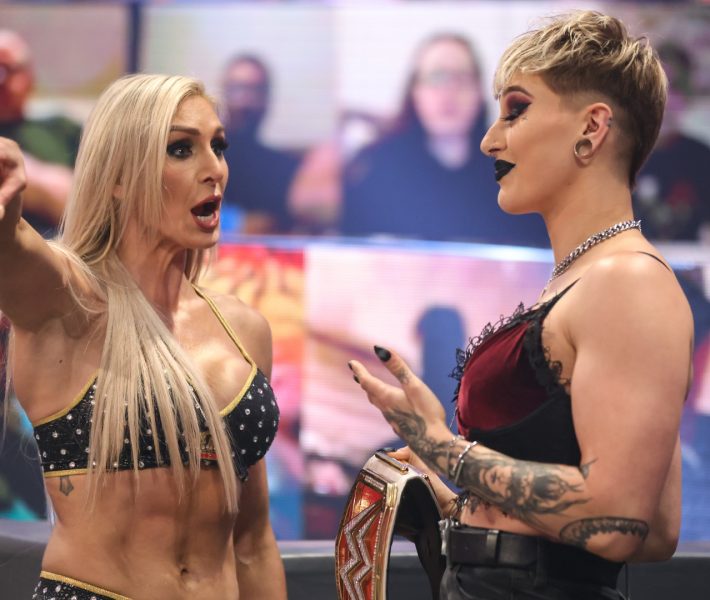 Charlotte says Rhea Ripley’s had a nice run but it’s over. In a few weeks she’ll be sending her to Hell. Ripley comes down to the ring and Charlotte looks miffed. Ripley says Charlotte can go to Hell and they come face-to-face. Miz tries to ease the situation and gets them to sit. Miz asks Rhea who she is and John makes a joke about garlic but Ripley just says she’s a nightmare for the entire division. We see footage of Rhea unable to beat Nikki Cross in two minutes last week. Charlotte laughs and says if she couldn’t beat Cross, she’ll never beat her.

Nikki Cross comes down to the ring and apologises for interrupting. She says she beat the RAW Women’s Champion last week, so it’s only fair she get the first title shot to the winner of the match at Hell In A Cell. Rhea says if there had been four minutes on the clock, Cross wouldn’t even be standing this week, but she did earn her respect. Cross says she could beat Charlotte in two minutes as well. Charlotte laughs and says she could beat her in one minute but Cross slaps her. Flair says she’s on.

The match begins and Charlotte tries to grab her but Cross ducks it and rolls from the ring. Cross taunts Charlotte until she goes out, then Nikki rolls back in and dances. Ripley is at ringside and she taps her watch at Charlotte, who goes for Cross again but can’t catch her. There’s one minute left and Nikki hides behind Ripley, who stands in Charlotte’s way.

Ripley and Flair argue and Cross runs back into the ring. Charlotte manages to catch Nikki with a knee, then drops her with a forearm. Flair puts Cross on the top rope but Nikki punches her a few times and hits a tornado DDT. Charlotte drops her and tries to apply a Figure Four but the time runs out and she looks mortified with herself. After Nikki wins, Charlotte turns to Rhea, blaming her for what just happened, as Rhea is yelling that Charlotte is nothing but a loser that’s why she lost.