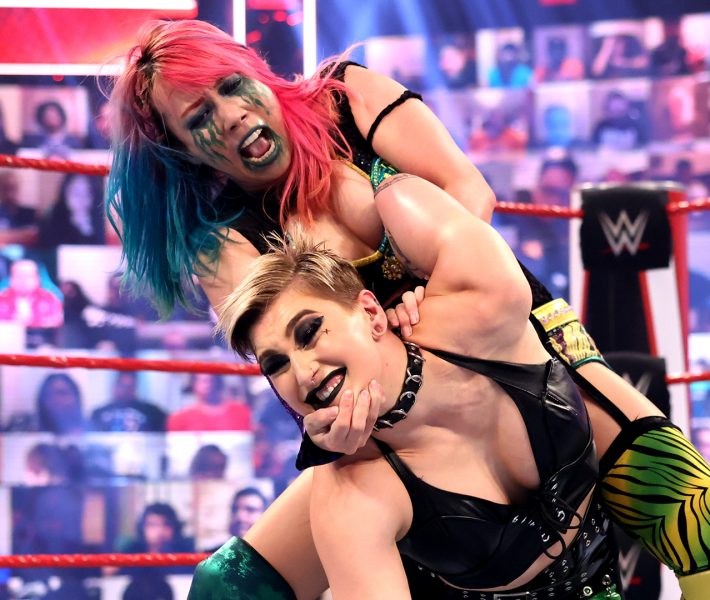 Sonya Deville is backstage when Asuka and Rhea Ripley walk in. Sonya says they’ve been at each other’s throats for weeks and she’s been given an idea for tonight. Rhea and Asuka can settle their differences tonight in singles action. Rhea asks if this was Charlotte’s idea and Deville won’t say it was or wasn’t. Asuka says she already competed tonight but she’ll do it again because she’s ready for Rhea.

They lock-up and Ripley forces Asuka into the corner and shoves her face. Asuka swings for a backfist but Rhea avoids it, then Asuka beats on her until Ripley tosses her across the ring by the hair. Rhea ducks a kick and blocks a drop toe hold and stomps Asuka. Asuka hits a rolling armbar but Ripley grabs the ropes with her feet. Ripley rolls outside and Asuka chases her but Rhea turns it around and kicks her through the ropes. Riple gets Asuka back inside and out comes Charlotte, distracting the Champion so Asuka can hit a spinning backfist.

Charlotte has joined the commentary team and Ripley has Asuka in a body scissors. Rhea hits a dropkick and shoulders Asuka in the corner a few times. Ripley kicks the back and hits some short-arm clotheslines. Asuka rolls outsie and Ripley goes after but Asuka kicks her and hits a sliding knee from the apron. Charlotte taunts Asuka but Ripley grabs Asuka and headbutts her. Rhea goes back inside to hit a northern lights suplex for a two-count.

Ripley wants the Riptide but Asuka counters with a Codebreaker. Ripley rolls outside and Charlotte gets in her face as well, only for Asuke to jump off the announce desk with a hip attack to Rhea. Asuka gets the Champion back inside and lands a missile dropkick for two. Asuka looks for another hip attack but Ripley catches her and hits the Riptide for the win.