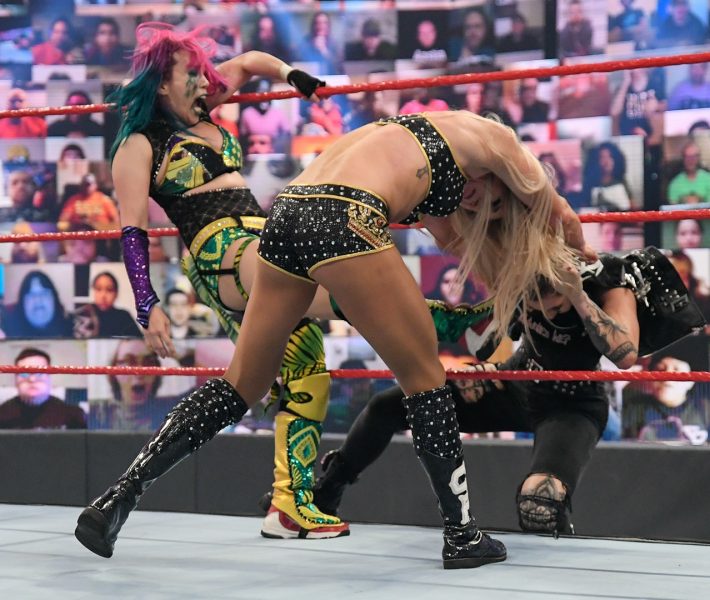 And she will show why she is the Queen. Asuka comes to the ring but before she can speak she is interrupted Rhea Ripley.

Ripley stays on the stage and Charlotte says if they want she can beat them both. Rhea can sit at ringside and take notes while she beats Asuka. Rhea says she’ll take that offer but she’s confident Asuka will beat her. Charlotte talks to Asuka in a condescending tone and says that’s so cute, she was the one ended her streak. Asuka keeps going to talk but Charlotte interrupts her until Asuka shouts “…tonight I will beat you bitch!”

Rhea Ripley is at ringside for this one. They lock-up and struggle for control, then separate and Asuka shoves Charlotte. They go back and forth with reversals and Charlotte attempts a backwards handstand but Asuka kicks her. Flair rolls to the apron and Asuka wants a hip attack but Charlotte avoids it and kicks her. Both women fight on the apron until they hit a double neckbreaker and both fall to the floor. Ripley stands up and stares at them both.

Back live and Charlotte is in control of Asuka and landing some big chops. Asuka is whipped to the corner and kicks Charlotte back, then hits a missile dropkick from the middle rope. Asuka lands a dropkick, then a pop-up knee to the face. Asuka with a hip attack in the corner, then a German suplex and a running kick for a near-fall. Charlotte slaps Asuka but gets caught with a flying armbar.

Flair wastes some time taunting Ripley, then runs back inside and at Asuka, who jumps over her and applies the Asuka Lock! Flair rolls to the ropes to cause the break. Charlotte drops Asuka and applies the Figure Four, then bridges to the Figure Eight to stare at Ripley at ringside. Ripley pulls Charlotte’s arms behind the referee’s back to break the hold. Charlotte grabs Rhea’s head and tries to drag her into the ring but Asuka kicks Charlotte and rolls her up to win.

After the match Asuka leaves and Ripley smiles at Flair from ringside.