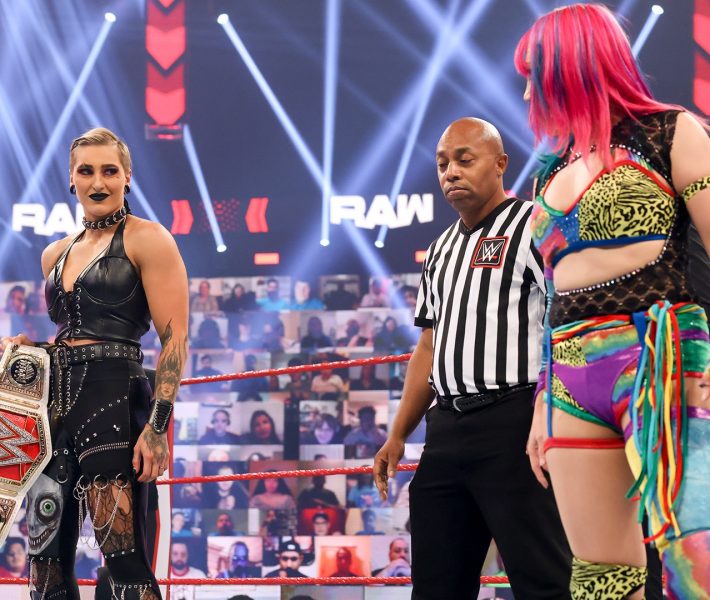 Kevin Patrick is backstage with Raw Women’s Champion Rhea Ripley. Ripley says she was confident in herself and will introduce a brutal new world order for the Women’s Division. As for tonight, she’s going to prove that she is still ready for Asuka.

The bell rings, and they lock up. Asuka puts her in the corner and forearms away at her. Ripley fights out and pushes Asuka to the opposite corner. Ripley forearms her, so Asuka shoves her back. Asuka goes for a drop-toe-hold into the corner, but Ripley blocks it. Ripley throws Asuka across the ring and clubs away at her. Asuka counters a facebuster into a roll-up for a two count. Asuka goes for a cross arm breaker, but Ripley quickly gets to the bottom rope. Ripley quickly kicks and elbows her down. Ripley positions Asuka on the top rope and goes for a back superplex, but Asuka fights back. Ripley quickly comes back with a dropkick that sends Asuka to the floor.

We come back from the break to see Asuka counter a move from Ripley into a pin, but Ripley quickly kicks out. Ripley attacks and puts her in the corner, but Asuka boots her back twice. Asuka then hits a missile dropkick.

Asuka hits a knee to the face and a German Suplex. Asuka connects with a hip attack in the corner. Ripley throws her off, but Asuka kicks her in the head and takes her down with a spin kick. Asuka hits a sliding knee to the head for a near fall. There was definitely a moment where they weren’t on the same page. It looks like Ripley was supposed to counter a missile dropkick into a Prism Shift, but Ripley just stood there. Ripley then applies the Prism Shift. Asuka gets to the ropes, so Ripley slams her for a two count. Ripley talks a little trash and attacks. Asuka avoids a dropkick and goes for a sliding kick, but Ripley moves. Ripley goes for an electric chair, but she just falls back before even lifting Asuka. Ripley tries again and really struggles to get Asuka up on her shoulders. It looks like Asuka was supposed to hit a crucifix slam counter, but it looked more like a Samoan Drop. They just lay there. That was really bad.

Asuka quickly goes to an arm bar, but Ripley gets out. Asuka then applies an Asuka Lock, but Ripley fights out. Ripley hits an electric chair slam for a near fall. They roll to the apron. Ripley goes for a suplex, but Asuka fights it and drives her to the ring post. Asuka hits a hip attack against the ring post followed by a DDT on the apron.

Charlotte Flair then attacks them at ringside.