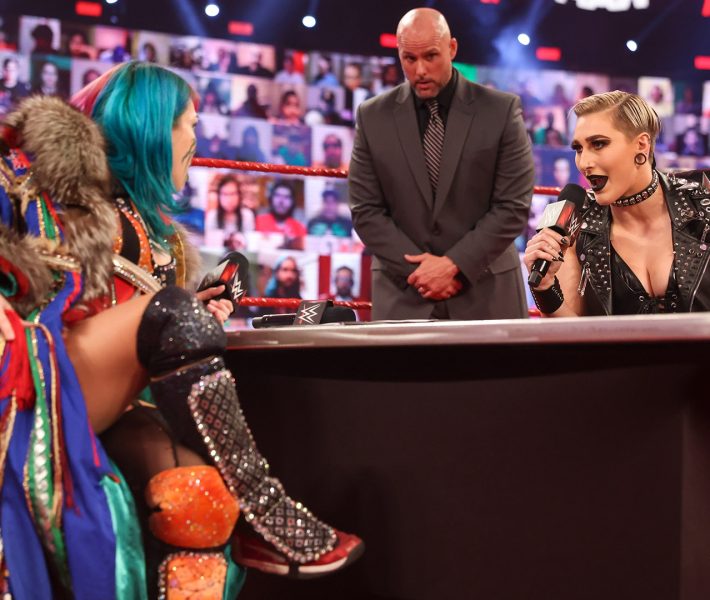 Rhea Ripley was shown talking to a man backstage while Phillips hyped the contract signing for after the break.

Adam Pearce hosted the contract signing for the Raw Women’s Championship match at WrestleMania. He introduced Rhea Ripley followed by champion Asuka. Ripley said Asuka should be labeled as the “current” champion. Asuka laughed and said she’s the champion and Ripley is overconfident.

Ripley said she was confident enough to challenge Asuka on her first night, and is now confident enough to tell her that she will beat her and take her championship. Ripley signed the contract, then Asuka did the same. Asuka spoke in Japanese, then said Ripley’s confidence is borrowed, not earned. Asuka kept jawing at Ripley, who got upset and dumped the table on her.

Nia Jax, Shayna Baszler, and Reginald walked out and spoke from the stage. Jax said she doesn’t know what’s worse, Ripley having the audacity to challenge for the title on her first night or Asuka accepting. Baszler said she and Jax have dominated the entire division for nearly a year and questioned where their WrestleMania match is. Baszler threatened Ripley, who asked what was stopping her. Jax challenged Asuka and Ripley to step in the ring with them next week. “We accept,” Ripley said before tossing the mic aside