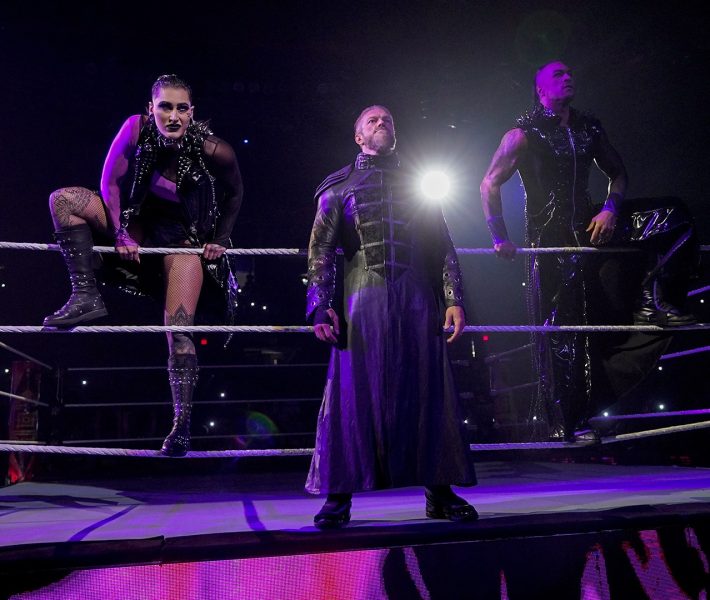 A brawl broke out between all six competitors that led to the good guys sending Edge and Priest out of the ring. Balor and Styles launched Morgan at Ripley to hit a hurricanrana before The Eradicator took her former tag team partner down with a stiff headbutt.

Ripley proceeded to dismantle Morgan for a while, but she couldn’t keep her down for the pin. The Judgment Day cemented their grip on the match as different members tagged in from both teams.

The crowd popped when Styles got the hot tag and started taking Edge and Priest down with his wide array of signature moves. Once Priest and Ripley helped him regain the upper hand, Edge drilled Balor with a Spear to get the win. 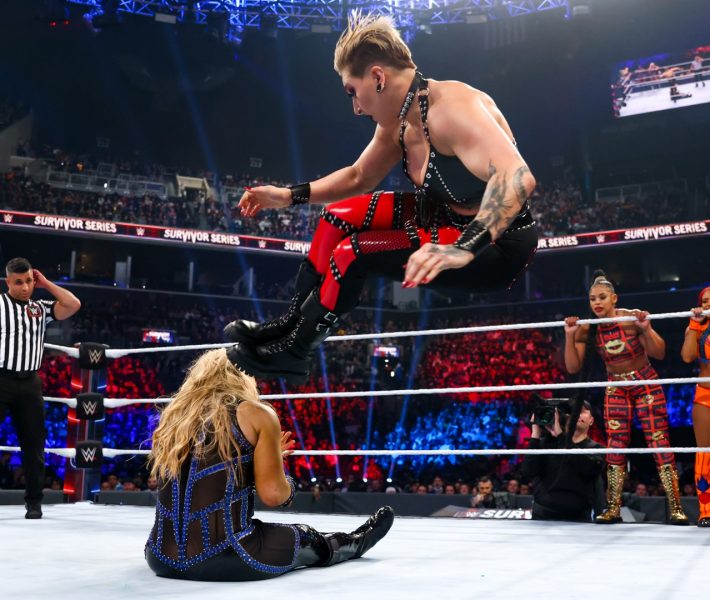 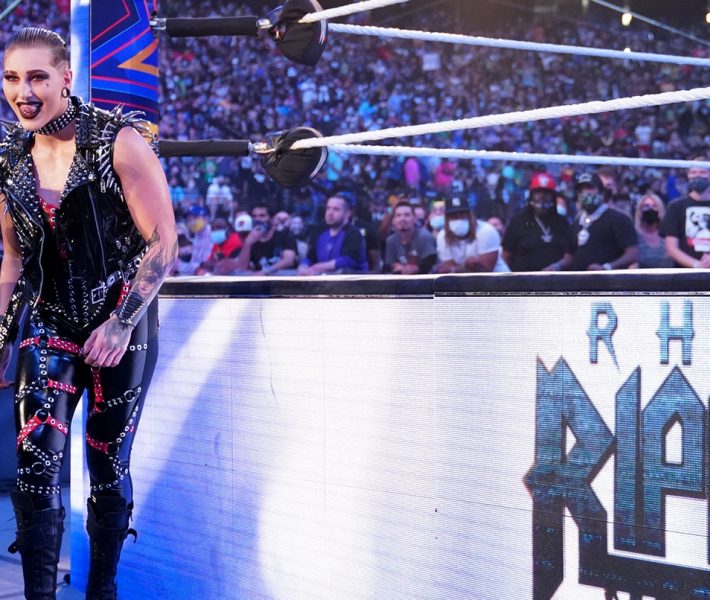 All three women traded offense early. Flair went for a top rope moonsault but Ripley got her foot up to counter and then nearly hit Nikki with Riptide. Things broke down into a stretch with Ripley and Flair battling one-on-one with Nikki knocked out of the ring. After Flair took Ripley out with a big boot, Nikki hit a big DDT for a near fall. As Ripley and Flair began to battle it out on the floor, Nikki came off the top rope with a crossbody on both women.

Big moves continued to flow from all three women before Flair hit a twisting moonsault from the top rope to the outside onto both of her opponents. Flair locked Ripley in the Figure-Eight back inside the ring but Nikki broke the hold by flying off the top rope. Nikki scored a near fall on Flair but found herself locked in the Figure-Eight seconds later, forced to tap out as Flair once again became champion. This was some very good high-octane wrestling with no real downtime from bell to bell. Flair winning may not excite fans who have already tired of seeing her as champion but it was likely the best possible result here. 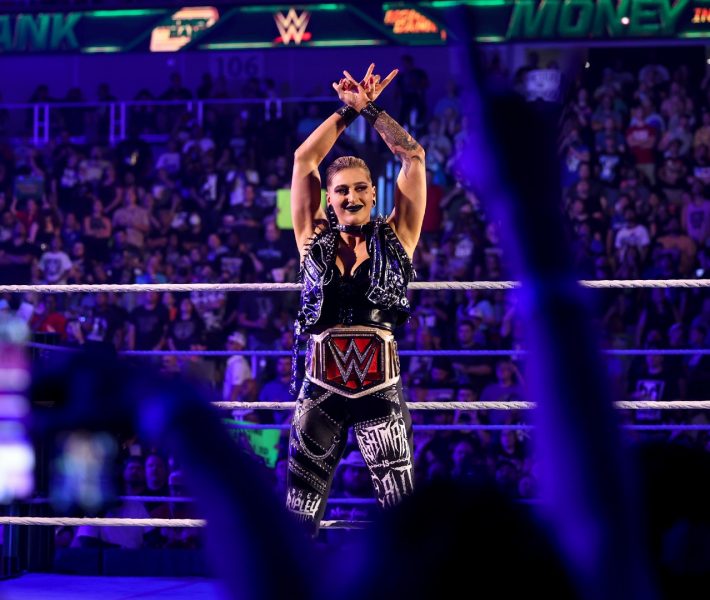 We go back to the ring and out first comes RAW Women’s Champion Rhea Ripley. We see how she won the title from Asuka at WrestleMania 37. Out next comes Charlotte Flair. She stops and poses on the ramp as the pyro goes off. We see stills from some of Flair’s big title win over the years. We get formal ring introductions from Rome.

The bell rings and they stare each other down. Ripley smirks at Flair. They lock up and go at it, then break. The crowd gives Flair some heat and she responds by giving them the middle finger, which WWE tries to black out. Ripley headbutts Flair after a lock up. Flair rocks her. Ripley slaps back. Ripley taunts Flair after rocking her. Ripley dropkicks Flair now.

Flair and Ripley trade shots on the apron. Ripley gets the upperhand and runs the ropes to dropkick Flair from the apron to the floor. Ripley follows but Flair sends her landing hard on the ground. Flair dropkicks Ripley against the barrier while she’s down. Flair brings it back in for a quick 1 count. Flair with a t-bone suplex into the corner. Flair shows off a bit and then stomps away while Ripley is down in the corner. Flair covers for another 1 count.

Flair grounds Ripley with a headlock now. Flair with more offense and showing off. She taunts Ripley, telling her to get up. Ripley fights back from the mat. They slug each other as the crowd chants for Ripley, which distracts Flair a bit. Ripley tries to grab from behind but she gets sent to the corner. Fans do some dueling chants now. Ripley with a big back elbow. Ripley counters while backed against the ropes, and dumps Flair over the top rope to the floor.

Ripley takes Flair down at ringside and yells out. They bring it back in the ring and Ripley delivers two short-arm clotheslines. Flair fights back but Ripley headbutts her. Ripley gets a pop and delivers knee strikes. Flair blocks a knee but Ripely kicks her. Ripley with a Northern Lights suplex for 2. More back and forth in the middle of the ring now. Ripley with a big German suplex.

Ripley goes to the top for the missile dropkick but Flair side-steps. Flair with a Boston Crab now. Ripley powers out and holds it for a 2 count. Flair with a single-leg takedown. Ripley counters the Figure Four for a 2 count. Flair levels Ripley with a jumping big boot for a close 2 count. Flair has a few words with the referee. Flair ends up on Ripley’s shoulders from the corner. Flair slides down for a sunset flip but Ripley powers up and eventually turns that into a big vertical suplex. Flair kicks out at 2. They trade big strikes on their feet now. Flair tells Ripley to bring it and Ripley unloads with big stiff strikes. Flair comes back and sends Ripley to the floor.

Flair gets emotional now. She runs with a big boot to kick Ripley off the apron back to the floor. Flair is hyped up now. Flair goes to the top and delivers the moonsault from the top to the floor, taking Ripley back down as fans cheer her on with a big pop. Flair brings Ripley back in the ring but Ripley blocks Natural Selection. Ripley turns that into her Prism inverted Cloverleaf submission. Flair rolls through for a 2 count. Ripley goes for Riptide but Flair turns it into a big DDT for a close 2 count.

Flair can’t believe the kick out. Fans chant “this is awesome!” as Flair sits up and Ripley begins to recover. Flair talks some trash and pounds on Ripley. Ripley fights up from her knees as they trade big strikes in the middle of the ring. Flair with signature Flair chops. Ripley with an elbow to the face. Flair drops her with an elbow and puts her feet on the ropes for leverage but the referee catches her and stops the count. Flair gets in the face of the referee but backs off. Ripley kicks Flair from the mat, sending her stumbling into the corner.

Ripley with big shoulder thrusts in the corner now. Ripley takes Flair to the top and works her over. Flair fights back but Ripley keeps control and climbs up. Ripley goes for the superplex but Flair knocks her to the mat. Flair hits a super Natural Selection from the top but Ripley still kicks out. Flair can’t believe it. Fans in the crowd are also shocked.

Fans chant “this is awesome!” now as Flair sits there on the mat. Ripley begins to recover. Flair nods at the crowd and stalks Ripley now. Flair goes for the Figure Four but Ripley counters and launches her back into the turnbuckles. Flair is on the floor now, trying to recover. Ripley rallies and gets hyped up. Ripley grabs Flair from the mat but Flair slams her head into the ring post. Flair traps Ripley’s leg between the ring post and the steel steps, and kicks it several times.

Flair returns to the ring and applies the Figure Four in the middle of the ring. She bridges into the Figure Eight as Ripley screams out. The referee checks on her and Ripley finally taps out for the finish.