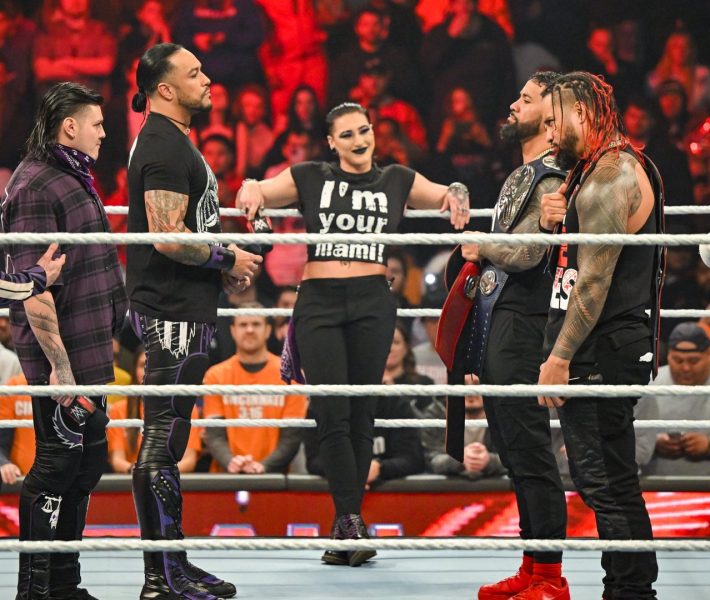 Judgment Day’s music hits and they then head to the ring. Rhea Ripley tells them to stop right there because the only thing The Bloodline needs to acknowledge is the fact that Judgment Day runs Raw. Balor says that they’re coming for The Bloodline next, then thanks Dominik Mysterio for filling in for him last week and winning the Tag Team Turmoil match. Damian Priest tells Finn Balor to take it easy in preparation for his match later, then tells The Usos that the Raw Tag Team Titles will be coming back to Raw full time. He says they have never stepped to Judgment Day because they’re scared. Mysterio asks them if they’re afraid and Jimmy asks who they should be scared of. Jey says they’ve knocked down every team that’s stepped to them, then says they started their reign after beating Mysterio and his father. They welcome them to the Uso Penitentiary.

Mysterio tells The Usos they wouldn’t have lasted a minute in prison, then calls them wannabes. He says the biggest wannabe is Sikoa. Sikoa doesn’t take too kindly to this and stares down Dominik. Ripley inserts herself between the two men, then stares down Sikoa. Mysterio hits Sikoa with a forearm, but Sikoa headbutts him. The Usos begin brawling with Judgement Day. Sikoa & Ripley are left in the middle of the ring, but Mustafa Ali comes in out of nowhere and blindsides them to kick off their match.

We head backstage to Cathy Kelley is with Judgment Day. Kelley asks Finn Balor how he feels heading into his match later and says if anyone is ready for the match, it’s him. Alpha Academy walks in and says Judgment Day barely snuck past them. Ripley tells Chad Gable not to make her do something she doesn’t regret.

Dominik Mysterio & Chad Gable starts this match off by they go for some mat wrestling but Gable tricks Mysterio then he tags in Damian Priest. Priest sends Gable to the outside, but Gable gets back in. Priest looks for a superkick, but Gable catches it and attempts to reverse it into the Ankle Lock. Gable escapes and sends Priest into the corner. He tags in Otis & Otis beats him down. Mysterio & Gable tag in. Mysterio low bridges Gable to the outside that takes us to a break.

After the break Mysterio sends Gable to the outside and tags in Priest. Priest delivers a rolling elbow and a jumping back elbow, then delivers a suplex. He sits him on the top turnbuckle, then clocks him with a forearm and tags in Mysterio. Dominik meets Gable on the top, but Gable knocks him off and goes flying. Priest & Otis tag in. Otis levels Priest with a splash and a lariat, then follows it up with a bodyslam. He goes for a pin, but Priest kicks out.

Otis delivers The Caterpillar, then ascends to the top rope. Priest meets him there and hits South Of Heaven. Gable levels him with a German suplex, but Dominik rolls him up. Gable kicks out and transitions into the Ankle Lock. Ripley distracts the referee, allowing Priest to hit South of Heaven to get the win.