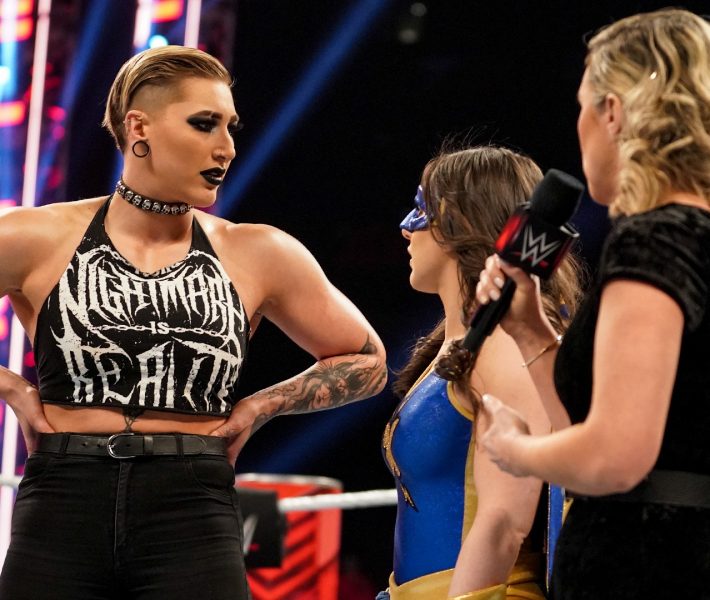 Super Brutality make their entrance to send us to break.

Super Brutality are interviewed in the ring.

They have an announcement, and Nikki ASH says that’s a challenge to Carmella and Zelina Vega for a rematch. Ripley gets in her ear and says that’s not what they talked about, and Nikki cuts her off and says everything’s fine, but Rhea says she doesn’t want to talk about this out here.

ASH says she wants to talk right now, and claims that once they get the tag titles back everything will be okay. Ripley fends off attempts to claim that she thinks she’s better than Nikki, but Nikki’s not having it and claims that she was the one doing Rhea a favor by sticking together.

Ripley says she never said she was better in the ring and ASH says she was talking about herself. Rhea gets hot and offers a hand to shake, saying it’s goodbye for now. Nikki says fine, she doesn’t want to be her teammate anymore, but she can’t shake her hand until Ripley looks her in the eye and tells her she still believes in her.

Rhea says she’s always believed in her and always will, and with her or against her, she’ll never stop believing in her and really hopes that they can be friends. Nikki asks if she means it and Ripley hugs her close. ASH poses on the ropes, Rhea offers a fist bump after and Nikki attacks her and beats her down!

She leaves the ring and says superheroes don’t need any friends while she stands tall on the ramp.