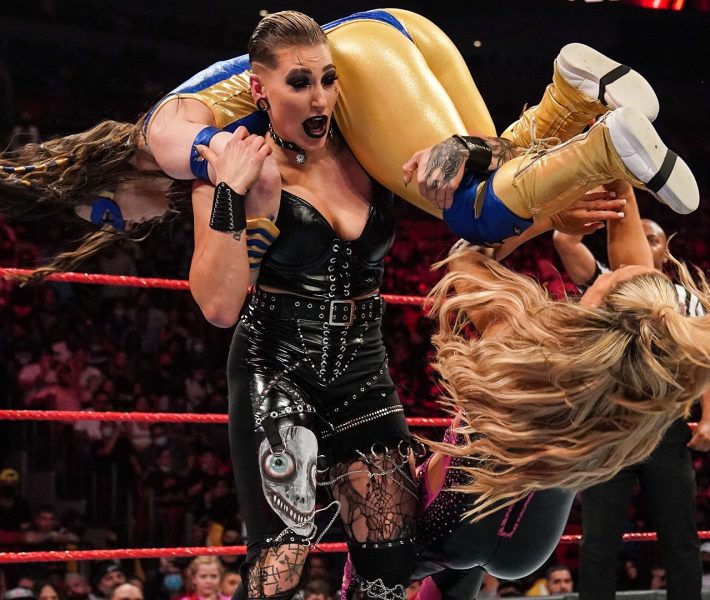 Rhea Ripley and Nikki A.S.H are backsatge and asked about their lack of things in common. Rhea says she believes they have the will to be Champions in common. Nikki says they’re getting closer and Rhea says they might have some gold in common really soon. Nikki shouts that it’s time to unleash “super brutality”.

Nikki starts against Tamina, who isn’t taking her seriously. Tamina toys with Nikki and overpowers her handily. Nikki forearms Tamina but eats a headbutt. Tamina attempts to sit on Nikki but nobody’s home. Nikki hits a seated senton to Tamina and tags Rhea. Ripley throws Nikki at Tamina, who caches her, then the two big women trade blows.

Natalya tags in and again Ripley lifts Nikki up and tries to use her as a weapon. Nikki gets the tag and kicks Natalya back but gets distracted by Tamina. Natalya htis a snapmare and a dropkick to the back. Tamina pulls Ripley off the apron and connects with a big superkick and Rhea crashes into the steel steps. The Champion’s are in charge as we head to the break.

Back live and Tamina misses a tackle in the corner. Natalya tags in and so does Ripley, who hits short-arm clotheslines. Rhea with a snapmare and a hanging dropkick to Natalya after knocking Tamina off the apron. Rhea hits a gut kick, then a northern lights suplex for a near-fall. Nikki tags in and hits a crossbody but Tamina breaks the pin, then Rhea dorpkicks her out of the ring. Natalya hits Ripley with a German suplex. Natalya grabs Nikki and wants the Sharpshooter but Ripley returns for the Riptide and the win!