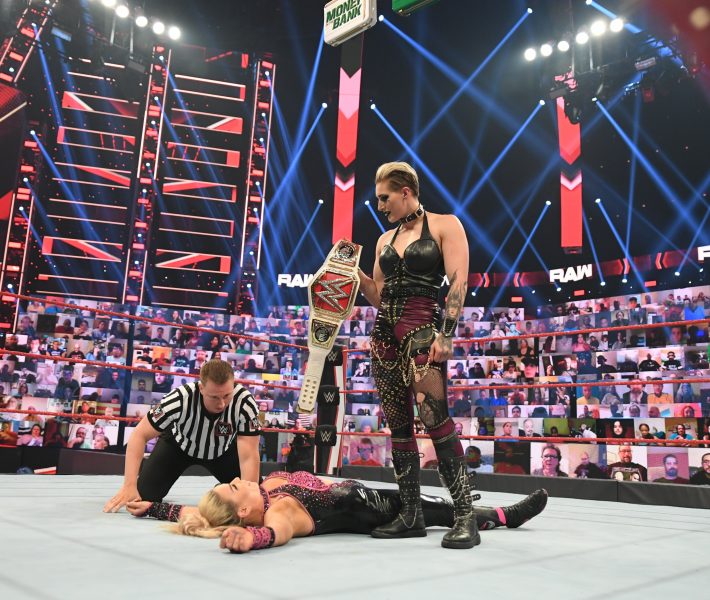 Rhea Ripley is interviewed backstage and she says Natalya challenged her and she’s not someone to back down from a challenge. As for Charlotte, she’s exposed her as a crybaby and on Sunday she ends the feud.

Ripley and Natalya battle for control with lots of holds and reversals. Ripley eventually hits Nattie with a headbutt that drops her. Rhea wants the Riptide early but Natalya counters and wants the Sharpshooter but gets kicked from the ring. Ripley goes outside and runs for a dropkick but accidentally hits Tamina. Natalya hits a discus clothesline to the Champ on the floor.

They’re abttling on the top rope and Ripley knocks Natie off before connecting with a missile dropkick. Ripley misses a splash in the corner but drops Natalya for a two-count. Ripley knees Natalya and hits a Northern lights suplex for a near-fall. Natalya catches Rhea with a sit-out powerbmb for a two-count. Natalya hits an atomic drop and runs over her back but Ripley avoids the dropkick.

Ripley lifts Natalya and applies the Prism Trap but Nattie counters by rolling her up for two. Natalya applies the Sharpshooter but Ripley kicks her off and into the buckles. Rhea hits a unique up-kick to Natalya before landing the Riptide for the win.

After the match, Rhea is caught with a chop block by Charlotte Flair! The Queen throws her jacket at Ripley and takes her down to apply the Figure Four. Charlotte drags herself under the bottom rope and hangs by the apron with the Figure Four applied as Rhea screams. Charlotte releases and smiles at Ripley, who looks furious.