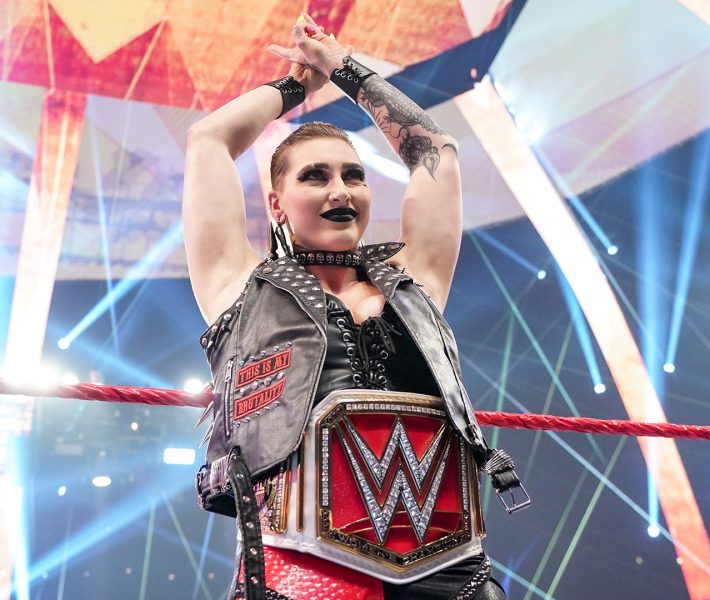 The music of the Raw Women’s Champion Rhea Ripley hits, distracting Flair. Cross rolls Flair up for a one count. Flair quickly knocks Cross out of the ring and sends her into the barricade before taunting Ripley. Flair continues to attack Cross and puts her in the ring.

We return from the break to see Flair applying a chin lock. Cross fights up and cradles Flair for a near fall. Flair takes her down and chokes Cross on the ropes in front of Rhea Ripley, who is seated at ringside. Flair chops at her and accidentally hits her in the ear. Cross tries to roll Flair up, but Flair stops it and stomps the chest. Flair props Cross up on the top rope and chops her. Flair talks a little trash to Ripley as well. Cross fights Flair back and boots her in the face. Cross then hits a tornado DDT, knocking Flair out of the ring. Cross goes to the apron and tries for a cross-body block, but Flair catches her. Flair holds her up and smiles at Ripley. Ripley just smiles. Flair then hits a fall-away slam on the floor. Flair taunts Ripley and gets counted out. Cross got back in the ring.

Cross celebrates at ringside before Flair big boots her down. Flair gets her in the ring and elbows away at her face. Flair goes for the Figure Eight, but Ripley runs in and hits the Riptide.

Raw Women’s Champion Rhea Ripley says to Sarah Schreiber that she’s going to send Charlotte Flair to the back of the line after this Sunday.

Asuka outsmarts Ripley and gloats to start the match. Ripley fights back and absorbs a clothesline, so Asuka goes to an octopus stretch. Ripley fights out and takes Asuka down for a two count. Ripley hits some short-arm clotheslines until Asuka fights back. Asuka goes for a whip, but Ripley puts the brakes on. Ripley goes for a corner dropkick, but she crashes and burns when Asuka moves. Ripley avoids an attack at ringside. Ripley blocks a kick and puts Asuka in the electric chair before slamming her off the barricade.

We return from the break and Asuka soon hits a hip attack on Ripley for a two count. Ripley comes back with a northern lights suplex for a near fall. Asuka hits a throw and a sliding kick for a near fall. Ripley eventually fights back at Asuka and hits the Riptide for the win.

Immediately after the bell rings, Charlotte Flair attacks Ripley. They get into a huge brawl that has to be broken up by officials. Flair’s nose got busted in the ordeal.